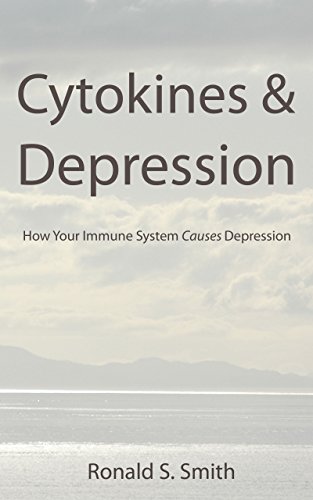 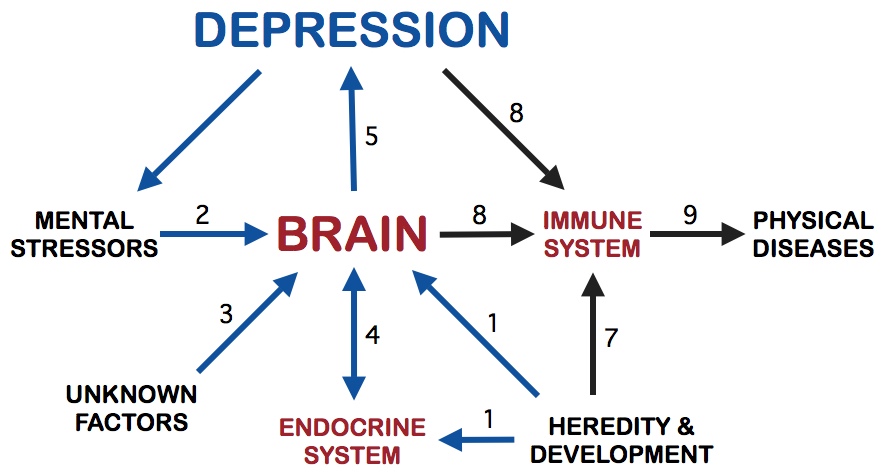 Let's look at Figure 1 for a moment. It diagrams the basic concepts of depression found in psychiatry's Current POD. The arrows show how the various systems and the brain interact. The numbers on the arrows loosely approximate a possible sequence of events in the development of depression. They are also useful in identifying the arrows for discussion.

Depression can be a cause of depression. It can feed upon itself. The symptoms of depression, such as fatigue, depressed mood, lack of interest and pleasure in things, irritability, social withdrawal and inability to concentrate, tend to make the quality of life worse. With these symptoms, conflicts with family, friends and coworkers will go up, while job performance and satisfaction with family and friends will go down. Some of the sad outcomes of depression are job loss, alienation from family and isolation from friends. Addictive substances become more attractive, because they make the horrible emotions of depression seem a little better for a short period. In this way depression causes psychological, social and economic stressors (i.e. mental stressors) to increase. Misery begets misery. The sixth arrow, going from depression to mental stressors, points out the phenomena of depression helping to induce more depression. A vicious, depressing cycle.

On the other hand, with the modern resources available, depression, instead of making depression worse, can also be self-correcting. If a depressed person recognizes his illness and seeks professional help, then the depression may attenuate. Psychotherapy may help by providing techniques to cope with mental stressors, thereby alleviating some depression. Antidepressants very often improve the symptoms of depression.

The Current POD does have some things to say about the pathophysiology of depression. Most of the insights have been due to pharmacology. The accidental discovery of the antischizophrenic drug chlorpromazine (Thorazine) in 1952 started the triumphant march of psychopharmacology. This event led to the discovery of tricyclic antidepressants a few years later. The search for the mechanism of action of these drugs became intense. It was hoped that the nature of mental illness would be revealed along with clear pathways for the prevention, treatment and cure of these diseases. These hopes have yet to be fulfilled, nevertheless, the search did lead to better drugs for treatment. In addition, neurotransmitter dysfunctions became the prime focus of the search for the pathophysiology of mental illness.

Neurotransmitter dysfunction is biological psychiatry's central concept for the pathophysiology of depression. Serotonin and norepinephrine dysfunctions are the leading candidates, although problems with acetylcholine and dopamine function are thought by a number of researchers to be of critical importance. Almost all the insights have been gained through studying the actions of antidepressant drugs. The actions of the drugs are complex and many, many secrets await discovery.

Cytokines were officially recognized and named by immunologists in 1979.1 By 1982 it was established that cytokines could communicate with the brain. Thus, in terms of the immune system-brain relationship, the Current POD is fifteen years out of date.

The Immune-Cytokine Paradigm of Depression 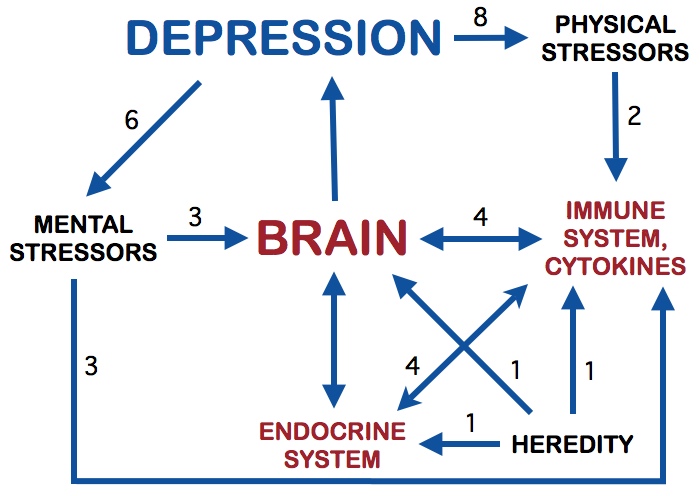 The second unique feature: the immune system has a well documented two-way communications link with the endocrine system. This is very important, because endocrine activation is a common finding in depression. Third: physical stressors (infection, trauma, cancer, organ dysfunction, autoimmune disease and physical diseases of any sort) activate the immune system, causing increased cytokine secretion. This, of course, is not new to immunology, but it is a very new addition to psychiatric models of depression. The cytokines are carried to the brain, where they help produce the symptoms and signs of depression. The Immune-Cytokine POD is the only model that explains how physical stressors can cause depression, thereby solving one of the great mysteries of psychiatric disease. Physical stressors replace the unknown factors found in the Current POD.

Physical stressors, in the Immune-Cytokine POD, are the principal causes of depression (arrow 2). Physical stressors include bacteria, virus, fungus or any other infectious agent. Trauma, organ dysfunction, cancer, foreign antigens, atherosclerosis, autoimmune disease, toxins, dying tissue are additional examples. Physical stressors are the main activators of the immune system An activated immune system, via the release of cytokines, produces most of the symptoms and signs of disease, both physical and mental, especially depression.

Increased cytokine secretion is one of the most important actions taken by an activated immune system. When cytokines are released they act like potent hormones on neighboring cells. If enough cytokine is released, it will migrate through tissue spaces and enter the blood. Once in the blood, cytokine can affect every tissue and organ in the body, including the brain and endocrine system. Arrows numbered 4 show this relationship.

Summing up What does the Immune-Cytokine POD say about the etiology of depression? Certainly it doesn't solve the problem of etiology, but it does provide a mechanism to search vast new areas for the causes of depression. First, the effect of genes and development on the immune system is a legitimate place to look for the cause of depression. Second, the vast domain of physical diseases is now open for exploration on the etiology of depression. Of keen interest here are chronic infections, since depression is a chronic rather than an acute disease. Acute infections are easy to identify via sudden onset, fever, overt inflammation and blood work. Once an infection becomes chronic, it is usually very difficult to find. Normally it is hidden someplace in the body and not accompanied by fever and overt inflammation. Unless someone is looking specifically for a chronic infection, blood work will usually pass as normal. In Chapter One, we mentioned the story on peptic ulcer: it took over 50 years to discover it was caused by a bacterial infection rather than mental stress. Think about that.

The Current POD incorporates important discoveries on the pathophysiology of depression, namely, neurotransmitter dysfunction and activation of the endocrine system, especially stress hormone release. The addition of the immune system remarkably compliments these discoveries. Immune system cytokines cause neurotransmitter dysfunction and endocrine system activation, especially stress hormone release (arrows numbered 4). There is also evidence that cytokines can function as neurotransmitters in the brain. Some of this information has been known for over 15 years. Thus, the Immune-Cytokine POD merely replaces an obsolete model of the pathophysiology of depression.

With our new model, depression can be thought of as a multifaceted sign of chronic immune system activation. It means the immune system has been fighting in a war for a long time, maybe against a bacteria, virus or fungus, or maybe against malignant cells or dying tissue. In a similar fashion, fever is a simple sign of acute immune system activation. It means the immune system is intensely fighting in a sudden war, usually against some kind of infectious agent. Many years ago, due to lack of immunological knowledge, fever was believed to cause disease and make diseases worse. We now know fever is merely a sign of acute immune system activation and the higher the fever, the more serious the disease. With our present understanding of fever, it is absurd to think of fever causing disease. Likewise, in our new model of depression, it is absurd to think of depression causing disease. Instead, depression is merely a complex sign of chronic disease.

Next chapter: The Immune-Brain Connection